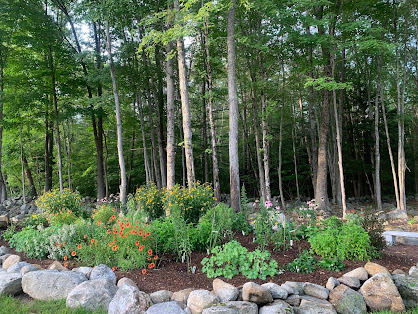 Updated overall garden picture.  Our garden is turning from pinks and purples to yellows, golds and oranges in the overall garden scheme.  We noticed some aphids on the Rose Milkweed and while spraying some soapy water on them, found this Monarch Butterfly Caterpillar as well as some lady bugs that were feasting on the Aphids.

The Spotted Bee Balm is attracting so many pollinators.  We have so many that I'm not sure how to identify them.  The one below is a predatory wasp that has a fuzzy white triangle on the back of its thorax.
The mystery plants have blossomed and it appears that they are different flowers
This garden has been an incredible experience.  It has brought so much life into our yard.  The native plants are making our garden beautiful.
at Tuesday, August 17, 2021 No comments:

Summer Changeover and Too Much Water?

Wow!! What a drenching we have had over the last 2 weeks.  We actually have slime growing on the ground outside the garden where the water drains down our sloping lot.  Could we have too much water? After last year's drought, this year must be the complete opposite.

Our early flowers are almost gone by, but we are starting to get later flowers starting to bloom.  The Spotted Bee Balm that were very tiny when we got them are actually starting to blossom (see above). The Brown Eyed Susans are starting to show their buds.  We also found some hitchhiker Coneflowers that were tucked in with the Beardstongue Foxglove and the Anise Hyssop while we were doing some weeding.  We transplanted them and we'll see what color they actually are (my plant ID software said Orange Coneflower, but we'll wait to see what they really are).

We have a rock wall that is around our patio and we found a really cool toad there.  I've never seen a black toad before - Does anyone know what kind of toad it is?  It has a non-spotted white belly and very few spots on its back. 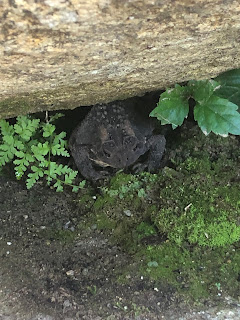 We're also seeing many more insects around.  We are seeing Monarch Butterflies but so far no pictures  Here are several insects that I've managed to get a picture of.  I'm not 100% sure of what they are so looking for help with ID. 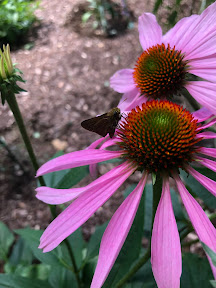 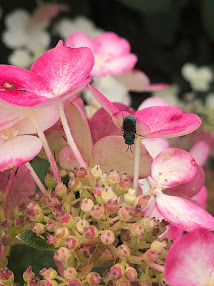 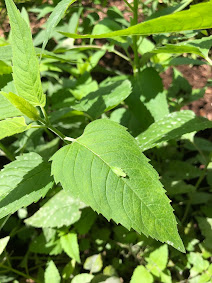 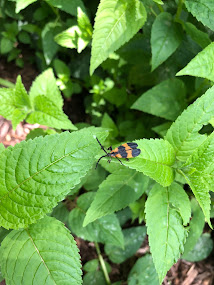 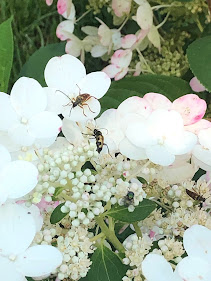 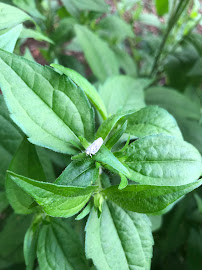 
We have been struck by deer!! Evidently the deer feel that our garden is a smorgasbord for them.  They especially like the Columbine, Liatris, and the Viburnam.  We made a quick trip to Agway and got some Coyote Urine to put around the garden.  This seems to have helped as they haven't been back for a snack since then.

We are getting many more butterflies now.  We have 2 types of Fritillaries, one that has dark shading ans one that is all the same color (maybe they are the same kind?).  We have some monarchs (no pictures yet) and we have some moths. 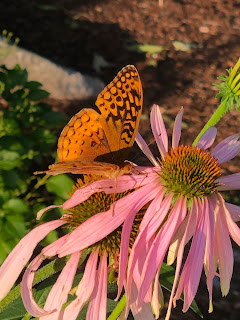 We also found some very tiny orchids in the woods next to our garden,  They are Broadleaf Helleborine. They are not native, but I've never seen them before.
Overall, this garden is an exceedingly joyous experience. It is hard work, but the pleasures of learning more about the plants that surround us is more than worth it.
at Monday, July 19, 2021 No comments:

The garden is changing so fast.  It's hard to believe that just a little under 2 months ago we were planting the plants.  This morning we had a small Coopers Hawk come visit our garden for almost an hour.  He was sitting on a branch overlooking the garden and watching for squirrels and chipmunks.  Still no picture of the red newt, but we're working on it.  I'm also finding that my knowledge of the local plants are expanding as I have a new interest in the plants around our garden.
This mushroom sprouted after Elsa went by.  The rain has brought all sorts of mushrooms out.  I'm working on an ID but so far no luck.
This bee is an unknown to me. but is very busy gathering pollen to turn into honey.  Its leg sacks are so full it could hardly fly.
This is a Fritillary butterfly, but I'm not sure which one it is.  Butterflies don't usually sit long enough to get a picture.  We are getting more butterflies as they hatch  The Hummingbirds are also starting to visit the flowers.
at Saturday, July 10, 2021 No comments:

End of June Update - including a Salamander

The New Jersey Tea has reached full bloom and is now going past.  Having never seen this plant before I am pleased to say we love it.  It is covered with this tiny white flowers that smell very nice.  When the wind blows (which seems to be always lately), the flowers dance in the wind.  The bees and flies love this plant as well.
The Bee Balm is also starting to blossom - it's nice to see these starting to show their red colors.  These should also bring in the Hummingbirds to drink.The purple coneflowers are our next blossomers.  They are interesting the way that the flowers start to show with first green petals, changing to pink petals and then to the pinky-purple color you see in the picture.
This morning we caught our second glance at a Red Newt Salamander.  Unfortunately we never have our camera with us when we see it.  My husband and I will keep trying to catch it for a glamour shot.

More Insects and a Toad 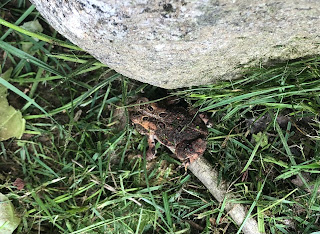 American Toad
Things are slowing down on the plant front.  The next to blossom will most likely be the Purple Coneflower.  However, the animals are starting to appear.  We found a small toad on the edge of the garden.  As you can see above, it is very prettily colored. We also have several Garden Ghost Spiders (see below). 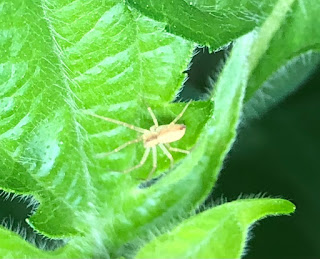 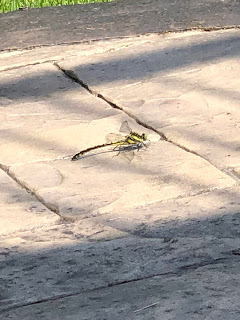 Green and Black Dragonfly
This dragonfly landed next to me on the patio.  I was fortunate to be able to grab a picture before it took off again.  It is beautiful, but I haven't been able to identify it yet. 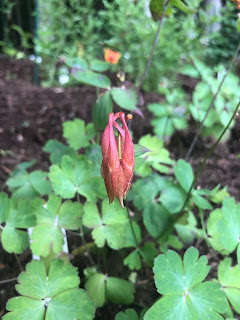 Columbine
The Columbine blossomed and quickly went by.  Perhaps it was the heat.  I was lucky to get this picture because they have all gone by now. 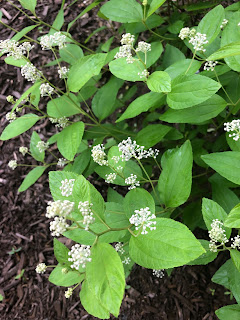 New Jersey Tea
The NJ Tea bush is still progressing towards being fully opened.  There are several small bees/hornets buzzing around it but so far I haven't been able to get a picture of them.
General Update:  The longest lasting flower so far has been the Beardstongue, followed by the Anise Hyssop.  The NJ Tea also looks to be a contender for this.  Also the Rose Milkweed that wasn't looking so good has recovered and no is doing well.
at Saturday, June 19, 2021 No comments: